At that time, public awareness of the need for industrial education was low, and particularly in Osaka, where a strong focus was placed on commerce, there were few institutions that offered industrial education. In such a social context, the pioneer spirit of people involved is worth noting, as they acutely sensed the approach of the times where engineering technologists were desperately needed and boldly entered the field of industrial education, which had been considered the most difficult field for a private school to manage. After having overcome many hardships, Josho Gakuen grew into a group comprising Osaka Institute of Technology and its graduate school, Setsunan University and its graduate school, Hiroshima International University and its graduate school, Josho Gakuen Junior and Senior High School, Josho Keiko Gakuen Junior and Senior High School. Approximately 290,000 graduates of the Group schools, now play an important role in various fields of society. 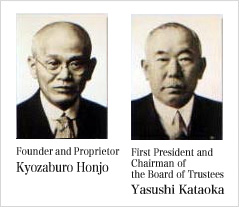